Verantwortlich für diesen Inhalt
Terra Dinarica Verifizierter Partner  Explorers Choice
This is the main trail along the entire length of the Via Dinarica that follows the natural flow of the highest peaks of the Dinaric Alps. The White Trail includes all of the highest peaks in each respective country. Although there are a plethora of activities along this head trail, such as mountain biking and rafting, it’s main function is as a hiking trail.

This is the adventure of a life time, but get yourself prepared well in advance: Via Dinarica is more than a trail, and diversity is its second name ;-)

Note that some areas in Croatia and Bosnia and Herzegovina are still suspected to be contaminated with landmines and unexploded ordnances from the last war. Check the stage trail descriptions for more information!

There are public transport accesses to trailheads of some stages. Check descriptions of the stages for details.

Check descriptions of the stages for details.

Standard hiking equipment, also sleeping bag and mattress might be needed at some stages. Check the stage trail descriptions for more information!

Frage von Frantisek Kalab · 21.07.2020 · Community
Looking at the gpx information for the whole trail gave me a different route (at least for the first section in Slovenia) compared to the gpx of this stage only. Is one of them more up to date? Or is there any other reason they differ?
mehr zeigen Weniger anzeigen

Antwort von Leo Lentz · 06.06.2021 · Community
Hi Frantisek Kalab, I want to go the Via Dinarica by mtb, like you I search for the gpx track through croatia, you can help me with this gpx? leo.m.lentz@gmail.com thank you very much leo
Antworten

Tony Pretyman
16.09.2021 · Community
I’ve noticed that a lot of the reviews are done by thru hikers which is great but if you’re looking to spend a week to 10 days on the Via Dinarica and don’t want to carry all your camping gear then I can definitely recommend hiking from Lake Blidinje to Umoljani staying in a combination of Mountain Huts and towns. Along the way I crossed the Cvirnisca and the Prenj Mountains. Had a swim in Lake Boracko and visited the mountain village of Lukomir. So many highlights in just one week! I was able to use taxis from bigger towns to connect to my start and finish points. Hiking without camping gear did commit me to some pretty long hiking days across difficult terrain so probably not for the inexperienced. My over night stops were Plasa Hut (Vilinac is better located but was closed), Jablanica, Meduprenje Hut, Rujiste, Lake Boracko and Lukomir before finishing in Umoljani. While camping gets you closer to nature being able to stay in accommodation meant I was able to meet some really interesting locals and was able to enjoy a hot meal and hot shower on most nights. I spent a lot of time planning this trip but really pleased how it all worked out. The Via Dinarica is not just for the Svens and Eva’s but with a bit of logistical planning can be a great walk for middle aged full time workers with kids. 🤪
mehr zeigen Weniger anzeigen
Middle aged man in Prenj
Foto: Community
Kommentieren

footsteps and a tent
13.09.2021 · Community
VD White Trail Montengro What a pleasure it has been! Montenegro embraced us with stunning mountains, deep and steep canyons, vast plains and delicious blue berries. We enjoyed every bit of it and would definitely recommend this part of the VD WT. Thanks to all the volunteers for their work! NOTES: - We hiked the Via Dinarica White Trail only in Montenegro, SOBO, in September 2021 - In general the trail is well marked, but a GPX is still advised as a guideline for parts where you have to search for signs more. At times the GPX deviates from the markings, but nothing too serious and they always come together. - This trail crosses at unofficial border points. - We crossed the BiH-MNE border after Brod (near Foca). From Brod it is around 30 km on asphalt to Piva HE (where you are on the trail again). When we were there the road was quiet and especially in MNE rather beautiful. - We crossed the MNE-AL border 8 km east of Vermosh (official). For the MNE-AL-RKS border you can apply for a permit to cross through the mountain peaks. More information here: http://www.peaksofthebalkans.com/Cross-Border-Procedures - It would be nice if also this last bit of the VD would get a separate section here in OA, so that more specific feedback can be given. - As it is not possible to add waypoints to the route in OA, we added POI (such as waterpoints, rest areas etc) directly in OSM (through maps.me) PRACTICALITIES: - Food: we got resupplies in: Brod (BiH)- Zabljak - Mojkovac - Andrijevica (off route) - Vermosh (very small shop) - Water: we had no distance over 20 km without watersources. However, we had a filter with us. We would recommend to take one, since there is a lot of cattle. - Sleeping: we mainly did wild camps. There are beautiful lakes along the trail. There are also options for paid accommodations. All mountain huts were closed on the days we were there.
mehr zeigen Weniger anzeigen
Gemacht am 01.09.2021
Kommentieren
Alle Bewertungen anzeigen Weniger anzeigen 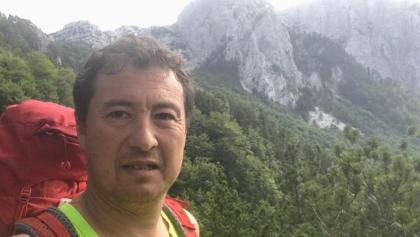 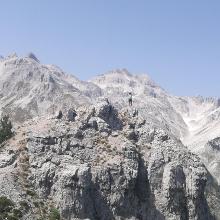 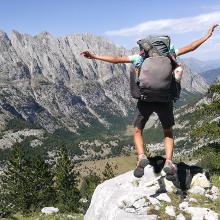 An easy walk/ mountain bike ride with not so many spectacular views, but a glimpse into an amazing underground world.

This is an epic hike over one of the most attractive mountains in Bosnia and Herzegovina. Prenj is an adventure including ascents to high peaks and ...