Even though the course of the Krka River is relatively short, the river itself and the area around it abound in numerous natural, cultural and historical attractions. Along almost every kilometer of the river, a curious visitor will be thrilled by unique and special sights – including seven large cascades and numerous small ones; remains of a Roman camp with an amphitheater; a fascinating Catholic monastery with a valuable collection of documents on a miniature islet; an Orthodox Christian monastery of extraordinary historical importance; complexes of old water mills; the oldest hydroelectric plant in Europe... All this, but also much more, is either squeezed together in a very small area of a narrow green canyon steeply cut into the bare and rugged karst landscape, or hidden along the canyon edges.
easy
Distance 20.2 km
Duration3:00 h
Ascent384 m
Descent365 m
The lower course of the Krka River, intersected by Via Dinarica, is protected as a national park. The most impressive and most popular sites in the Krka National Park are the cascades of Skradinski buk and Roški slap, together with the islet of Visovac in the middle of Visovac Lake. The islet of Visovac is home to a church and a Franciscan monastery with a valuable collection of books and artwork, including 620 documents from the Ottoman period. Skradinski buk is one of the most beautiful tufa cascades in Europe. It consists of 17 tufa steps spanning 800 meters in length. Visitors can explore the cascade by walking along trails and bridges. The site of Skradinski buk also includes an ethnographic collection and old water mills. Jaruga hydroelectric plant below Skradinski buk is the second oldest hydroelectric plant in the world and the first such plant in Europe (it was opened in 1895, only three days after the first hydroelectric plant in the world on the Niagara Falls).

The Krka River ends its voyage to the sea at Skradin – one of the oldest settlements on the Croatian Adriatic coast, with the oldest monuments from the area dating back to the 4th century B.C. This town has a genuine Dalmatian spirit, and there is also a nautical marina next to it. 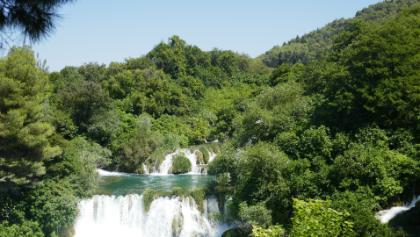 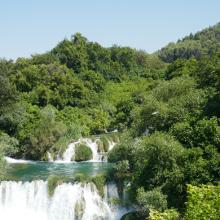 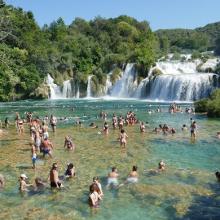 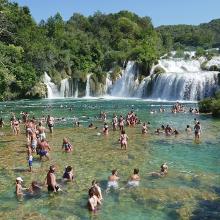